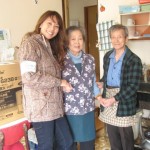 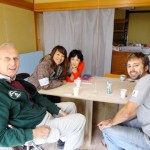 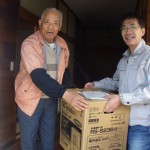 2011.November
In the end of October, during my stay in Los Angeles, I went to see my best friend Oose (Ref. Oose’s blog→http://ameblo.jp/oose） and she offered to donate heaters. I called Fumbaro Head Office in Tokyo right there and requested to coordinate the distribution of heaters in Hisaichi. They told me to go myself to deliver the heaters, so as soon as I arrived in Narita Tokyo, I had to say good-bye to my flight ticket home. In the next two days in Tokyo, I bought winter clothes and got my video camera, guide and driver ready. I went to seek for professionals’ advisories on how to make a Documentary Movie and before I knew it, I was on road trip heading to Touhoku.

The distribution area which they found upon my request was Nango in Kesennuma. The forgotten area where all the houses were half-destroyed. I delivered one hundred heaters there.

Not even one paper plate was donated until now. A macho dad who dig all the mud and recovered the street alone right after the Tsunami came after us and told me “All the donation went to the temporary housing and I thought we were abandoned, but today, for the first time, we got some help. I don’t know how to thank you.” He told me so with tears in his eyes.

I didn’t want to just give things away. See if the receivers get satisfied with the donations and only then the aid has accomplished; that’s how I thought. Therefore, instead of one way giveaway, I wanted to provide information about who gave them those heaters so that receivers know the occasion. So, I arranged the followings beforehand:

① A flyer that lists the information about the donor, Oose, and a contact address.
② Pre-stamped envelop with letter papers inside so that they can just write and send it even if there’s no post office nearby.

Thank you for that Head Office! I taped these two things on the heater and driver them one by one to half-destroyed houses.

Upon the delivery, Ooma-san and Kikkawa-san from Fuchu chapter in Tokyo worked hard at the sight. (Thank you two!) Upon my request, they made a research. They found out the house holds who are willing to stay living in the area and not having any heaters in the house. They made a map with red circles on those houses and we made delivery according to it. A lot of houses were absent, so it was very useful that we attached the flyer. Good job ♪

One of the thank-you letters say “First, I was suspicious thinking how would anyone get to know what I wanted. But soon, I found out where it came from and my neighbours told me it was from the real TV show people, so I got relieved”. Haha, it wasn’t from Santa-Clause nor some prowler. I’m glad that the flyer gave them peace of mind.

I personally believe communications under any circumstances should be both ways always. That’s the only time we feel “our hears are connected”. The people in the disaster area are suffered from the sense that their voices are not being heard. I reaffirmed myself that I should keep operating the aid based on this principal: listening to their needs first.

After the delivery, I was taken to Minamisanriku-cho in Miyagi. 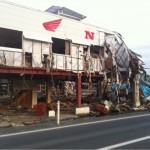 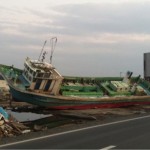 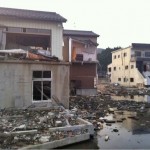 Three days later, Mr. Watanabe, the chief secretary of Fumbaro Headquarter sent me these scanned data of the thank-you letters.  He mentioned it took time to scan them all, but it was only three days later that I received them.  So fast!  I guess everyone mailed it on the day they received the heaters.  I list just a few of them here for you to read.  Oose, thank you for your generous donation. 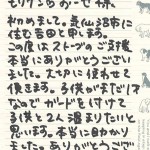 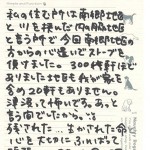 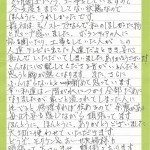